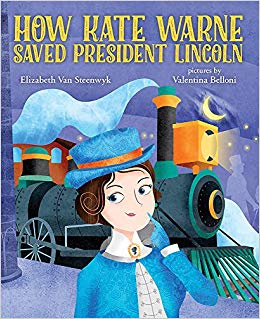 Summary: Kate Warne was America's first woman detective, and herself a woman of mystery. She convinces Detective Allan Pinkerton to give her a job, because women are better at ferreting out secrets by obtaining the confidence of loquacious housewives and boastful men. Kate is master at disguises and discovering the ill-intentions of others, especially where newly elected president-elect Abraham Lincoln is concerned. Kate and Pinkerton thwart a planned attack on Lincoln by ferreting him to safety ahead of schedule to the inauguration in Washington D.C.

Straight Talk for Librarians: When America got around to wondering whether or not women be police officers, it was already a moot question, because there had already been one. Kate Warne not only was America's first woman detective, she was ultimately responsible for saving America's greatest president. She was head of the Pinkerton DC office, which ultimately became the secret service. The collage like illustrations will appeal to very young readers, but they ultimately detract from the story. Ultimately, Kate is as much of a mystery as the cases she solves. She dies young, but Pinkerton keeps her memory alive in his writings and even has her buried in the family crypt.
on December 03, 2019