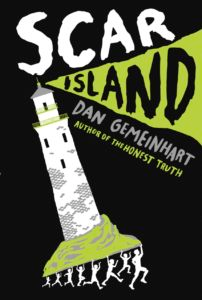 Slabhenge Reformatory School for Troubled Boys is on a rocky outcropping in the sea, accessible only by boat. It would be impossible to swim to shore because of the rough waters. Jonathan Grisby is the newest arrival at Slabhenge and it does not start off great. He’s cold, tired and hungry. It just gets worse when he is singled out by the adults. There are eight adults in charge of this so-called school, that used to be a mental institution, so it resembles a prison more than a school. As the story goes on, the boys find themselves without supervision and have to agree on their new found freedom. The story is suspenseful, thrilling, mysterious and dangerous. This was one of those books that was impossible to put down and there was no going to bed until it was finished.

Straight Talk for Librarians: The author did so many things in this book that stood out to me. One of the things I loved was the references to stories, where the boys found themselves in a similar situation: Robinson Crusoe, Treasure Island and Moby-Dick. I think the references to these books will make some enthusiastic readers seek these older titles out. There are also a lot of emotional moments that these boys deal with. Some are heart breaking, but might help some readers identify with these characters. Clearly, some of the boys made some bad choices and that is why they ended up at a reform school, but it doesn’t have to define who they become. Maybe readers will see that it’s a good thing to open up and talk about their feelings and emotions with friends who don’t judge them. A lot of educators are talking about social and emotional learning and this book would be a good tie into that...in a non-preachy, suspenseful, adventurous kind of way. This would be a great book to put into the hand of a student heading “up north” in Michigan because of the lighthouse. How fun is it to read a story about a lighthouse, while visiting one??? If you are in an IB school, there are so many characters that can lead to an amazing discussion on the different attributes of the Learner Profile. For example, Colin was very principled in his stance and didn’t waver on his belief. He was knowledgeable about a lot of things and he was very caring because he looked out for his friends. This is also a great choice for readers who love a fast-paced, heart pounding adventure. This is a great purchase for a middle school library.

Email ThisBlogThis!Share to TwitterShare to FacebookShare to Pinterest
Labels: 2017, adventure, fiction, YA