Death Coming Up the Hill, written by Chris Crowe, reviewed by Bethany Bratney 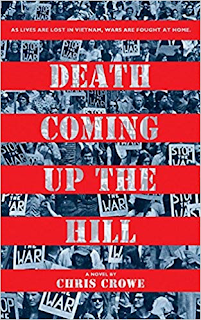 Summary: Ashe is seventeen years old and his world is full of war. It’s 1968, and the Vietnam War
rages on, the increasing death tolls reported each Thursday in the newspaper. The war is center stage in his home, where a different war is taking place between his protest-attending, peace-loving mother, and his hawkish, outspoken father. It seems that the only thing they ever agreed upon was getting married when they found out Ashe was expected, so the conflicts outside of the house only amplify the conflicts inside. Ashe spends his days with the new girl at school, Angela, whose family feels stable and safe, despite Angela’s brother being over in Vietnam. They share their favorite class, history, with Mr. Ruby, who is the only teacher who wants to speak openly about the traumatic times in which they all live. Ashe is terrified of both of the wars in his life, but a shocking turn of events in his family may force him to face both struggles head on.

Straight Talk for Librarians: I regret not reading this book sooner! This incredibly moving story is made so much more incredible by its format. The entire novel is written as a series of haikus, each syllable representing one of the 16,592 Americans who died fighting in Vietnam during 1968. Each short chapter is headed with a week and month, along with the death count reported in that Thursday’s newspaper. This format is perfect for historical fiction about this time period, which may interest teen readers but be less accessible in other formats. The story is emotionally charged, putting faces and real feelings to an event that is far removed from our student’s lives. It is chock-full of relevant historical details without making the reader feel like they are reading heavy nonfiction. Both the format and the compelling nature of Ashe’s story make this a very quick read, another selling point for young readers, particularly those who are less inclined to pick up a book. Add this book to your historical fiction collection today!
on November 21, 2019