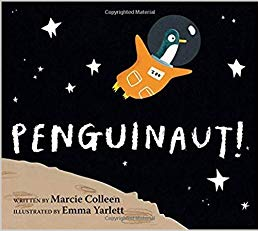 Student Reviewer: Claire T.
Summary: Orville is a penguin who lives in a zoo with many other animals. He is much smaller than all of his friends, and is sad because they go on exciting adventures without him. Orville decides to go on the biggest adventure he can think of - a journey to the moon! He does it all by himself, and has to try a lot of different things, but eventually he succeeds. He makes a rocketship out of cardboard, and gets to the moon. When he’s there, though, he realizes that he misses his friends. Fortunately, he finds a note from them in his spacesuit and it gives him encouragement. At the end of the book, he flies back to the zoo and makes a spaceship big enough for all of his friends.

Straight Talk for Librarians: This book conveys several important messages, while being sweet and adorably illustrated at the same time. The major theme in the book is that you can do whatever you set your mind to as long as you persevere, as Orville has to try many different ways to get to the moon before he is successful. His friends doubt him at first, but he believes in himself, further showing the importance of perseverance. Additionally, there is the message that appearance shouldn’t inhibit opportunities. As the book begins, “Orville was small. His friends were big.” Despite this difference, the penguin is successful. One final message is that friends are important, and that you don’t need to succeed alone. At the end of the book, Orville goes back to earth to get his friends, after realizing that being on the moon isn’t fun when he’s the only one there. These themes are all important for emerging readers, and are presented in a fun way. As for the art, it is bright and colorful, creating an overall joyful mood for most of the book. The pages contain many details which emerging readers would be excited to look at. While on the moon, however, there are fewer colors, which helps convey Orville’s loneliness. And of course, the penguin and all of his friends are extremely cute. This book would be great for reading aloud to a younger audience, or as part of a display on space travel. 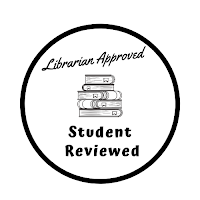