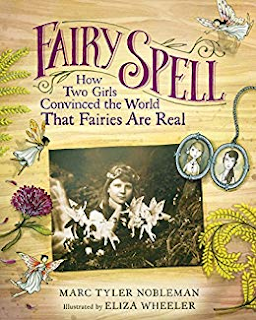 Summary: This non-fiction picture book by Marc Tyler Nobleman will grab readers’ attention with the beautiful illustrations, by Eliza Wheeler, and the historical photographs used to support the text. This story starts during World War I, when Frances and her mother moved from South Africa to Cottingley, England. Frances was staying with her aunt, uncle and sixteen-year-old cousin, Elsie. The cousins became fast friends and were practically like sisters. During 1917, the girls spent a lot of time by a stream in the woods near Elsie’s home. Frances was mad at the adults in her family because they did not believe in fairies. Elsie convinced her father to let her borrow their new camera to take a picture of the fairies. This was during a time when photography was so new, that most people had never taken a picture or even had a camera. Elsie took one photo and her father developed the photo. The photo was of Frances surrounded by fairies. The girls were adamant that the fairies were real and their parents did not know what to think. Elise took another photo and the adults were beginning to believe that fairies were real. News of the photos spread and were discovered by Sir Arthur Conan Doyle. He published an article in a popular magazine and all of a sudden the whole world was debating the existence of fairies and the authenticity of the photographs. Eventually, the furor died down and the articles were largely forgotten until 1965, when another reporter tracked the women down to ask them again about the fairies. The truth was not revealed until 1983. Elise was 81 and Frances was 75.

Straight Talk for Librarians: What a great purchase for all school libraries! Younger readers will enjoy the non-fiction picture book about the great fairy mystery and older students will get a first-hand look at the research process. This book is such a good example of how history can be fun, exciting and intriguing. It would be an inspirational book to get them started on their own historical research process. I think it would make for a good read-aloud before jumping into an IBDP history internal assessment or extended essay. For younger students, it’s a good lesson on celebrity culture, source analysis and the idea of hoaxes. The author’s note at the back of the book makes for an interesting read. The sources used for this book set a good example for students as it gives insight into how historians and authors do research for books. The beautiful, pastel watercolor illustrations coupled with reproductions of the original Cottingley Fairy photos add so much to the story. Teachers and librarians can use it to teach information literacy and discuss source evaluation, hoaxes, and image manipulation. This is a book that readers of all ages can enjoy and learn from.
on January 15, 2020