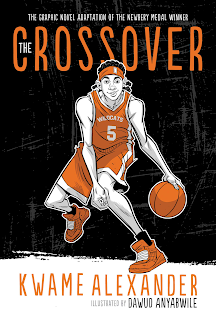 Summary: This graphic novel version of Alexander's novel in verse includes all of the same text as the original with illustrations added by Dawud Anyabwile. The Crossover follows Josh Bell, also known as Filthy McNasty, as he plays basketball, talks trash, and learns about what it means to be a brother, son, and friend. Like many siblings in middle school Josh and his twin Jordan love each other and are constantly fighting. Girls and basketball start to strain their relationship in new ways. When the boys realize that their former NBA-playing dad isn't as invincible as they thought he was, they have to decide how they're going to handle it.

Straight Talk for Librarians: Alexander's outstanding, visual poetry is brought more vividly to life by Anyabwile's illustrations. Anyabwile restricts his color palette to orange, black, and white, continuing the colors first used on Alexander's novel. The orange brings to mind the color of a basketball and is used largely as background color other than when it's being used for the ball itself. Anyabwile uses a combination of framed and unframed illustrations to help direct the reader's focus. Students who loved the novel will love this graphic version of it. English teachers could easily use the book as a mentor text for student writing, either in its entirety or as individual poems. In addition to having students model their own writing after Alexander's, Anyabwile's illustrations provide inspiration for illustrating text or as mentors for projects in art class. There is so much to unpack throughout both the text and illustrations when it comes to allusion, theme, onomatopoeia, word choice, voice, color palette, and inference.
on January 15, 2020