Hope for Winter: The True Story of a Remarkable Dolphin Friendship, written by David Yates, reviewed by Klaudia Janek 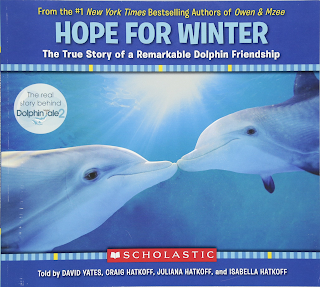 Summary: This informational picture book is the real story behind the Dolphin Tale2 movie. Winter was the dolphin who received a prosthetic tail. Winter needed companionship and was paired with another dolphin named Panama. Panama was an elderly dolphin that did not have a lot of time left. Another rescue dolphin named Hope was paired with Winter. Hope would not have been able to survive in the wild since she was found injured at a very early age. They both now live at the Clearwater Marine Aquarium.

Straight Talk for Librarians: The story in this picture book is told in such a way that as the facts are presented, it is still suspenseful and readers will keep hoping that things will turn out for Hope and Winter. There are a lot of photographs that help to tell the story. I think this book does a lot to raise awareness about dolphins and about the Clearwater Marine Aquarium and the dedicated team of scientists. This book is good for independent reading in informational texts. It is packed full of information and there is some scientific terminology that readers will learn. The book is positive and hopeful, even though the dolphins ended up at the aquarium due to tragic circumstances. It might be a bit of a tear-jerker, but is a must-read for all dolphin lovers.
on January 21, 2020